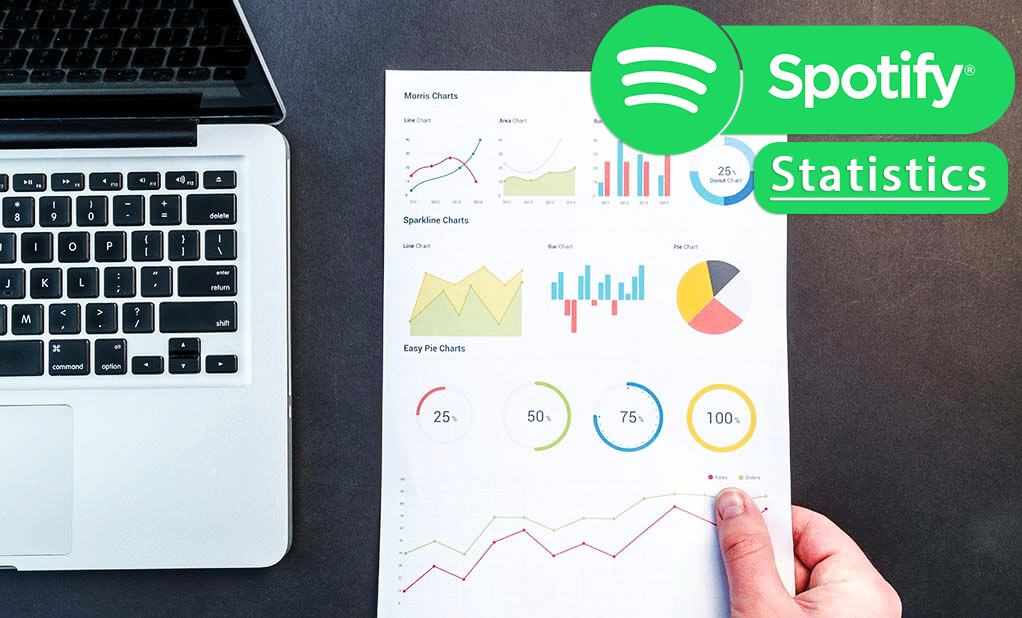 Spotify is one of the leading music streaming platforms in the world right now. Let’s take a look at what we think are some important statistics for marketers.

Like most companies and product ideas out there, Spotify was the solution to a problem. It is an international music streaming platform that lets you listen, access, and download millions of songs on any device. Its overall goal is to make its content universally accessible.

Spotify was created with the goal of preventing people from downloading music illegally.

When Spotify first started back in 2006, it was only available in six countries in Europe. However, by 2011, it had launched in the American market, which presented a great opportunity for growth. People using Spotify can choose from two different options.

The free option allows you to listen to music as often as you want, but you will need to put up with ads between tracks. Their Premium option lets you pay a monthly subscription fee, and you gain access to the entire platform, without having to listen to ads. You will also get to enjoy a better music quality.

Initially, Spotify provided free accounts to users by invite, so that it could manage the growth better. It also launched its paid subscription at the same time, so that everyone could pay for it if they wanted to.

Spotify launched Premium accounts for listeners that allowed them to upgrade to Premium for one month, three months, six months, or 12 months. When this opened to the American market in 2011, the brand adopted a different strategy.

It began by offering a six-month free trial, which was supported by ads. This meant that new users could play music as often as they wanted, without the ads. When those six months expired, users were restricted to listening to 10 hours of music each month, as well as five song replays.

In the same year, the platform decided to drop all limitations that it had around its free service.

Spotify is Now Available in 79 Countries

Spotify now has 44 offices around the globe, and while you might think that Spotify is really popular in America, it is actually more popular in Europe.

As we mentioned, Spotify has two types of subscriptions for its users to choose from. These are part of the brand’s overall monetization strategy.

Spotify’s free version is supported by ads, which is how Spotify has been able to scale its services, and target audiences to start paying for their Premium subscription. However, if you can’t afford their paid plan, their ad supported version has a reasonable number of features to keep you lisetning.

Majority of People Using Spotify are Between 18 and 34

This majority group presents a very attractive opportunity for marketers.

Spotify Users Listened to Spotify for 25 Hours Every Month

This can be broken down to approximately 6 hours per week.

Signing up with Spotify

When you sign up for Spotify’s free subscription, you get to listen to any playlist, album, or song at any time.

However, after you listen to a couple of songs, you will need to listen to an ad as well.

However, if you use the mobile app, things are a bit different. There are limited playlists, where you can freely listen to songs in the order that you want, and you can even skip tracks as well.

However, outside of your personalized playlist, there’s not a lot that you can do. You can listen to artists, albums, or tracks of your choice but on shuffle. This means that you are limited to skipping just six songs every hour.

Spotify’s paid plan comes with a lot of benefits. It allows you to gain access to high-quality tracks both online and offline. This service has been divided into three different plans.

Spotify standard plan allows you to access Spotify’s entire catalog of songs, podcasts, and audio books. The service is still available even when you are overseas, and you can play and pick any track on your mobile. It doesn’t come with ads, has offline options, and you can stream content that is high quality.

The student plan offers people the same options but is targeted for students. This means that it lasts for one year at a time and has a four-year limit in total. It is available to students who are enrolled at any University or college. It is slightly cheaper than the standard Premium plan.

This plan allows up to six people who live together to access it. It also allows for parental control over inappropriate music for any member, along with the rest of Premium’s standard features.

And 130 million of these people are signed up to Spotify Premium.

However, Apple Music is not far behind this, with 25% of the market.

Of course, the aim of any company in any industry is to be profitable. However, Spotify has been struggling with this for a long time. They have been reporting a loss for 12 years in a row.

This means that the streaming music giant has been operating for more than a decade, and they haven’t made a profit yet. However, they have still been growing their influence on the market, and they expect to return a profit at some point in the near future.

It’s no wonder that Spotify’s revenue was $6 billion considering how many people use it.

Spotify spends most of its revenue on music licenses and it also spends a lot of money on development and research.

It continues to outperform its competitors when it comes to subscriptions and listens. However, one music streaming giant that it can’t beat is YouTube.

How Many Songs are There on Spotify?

There are currently more than 15 million tracks on Spotify. This is much more than anyone could listen to in their lifetime. Another thing that Spotify has that a lot of other music streaming platforms don’t is a personalized experience.

For example, the annual ‘Spotify Wrapped’ shows you your music choices throughout the year, so that you can look back on your year in terms of music.

Billie Eilish has the most streamed album

And her hit ‘Bad Guy’ was the second most streamed song of 2019.

This occurred as a result of Spotify’s deal with Gimlet Media Inc., which is a market leader for podcast publishing and creation.

A big part of why Spotify has been so successful is because of its machine learning and artificial intelligence. Spotify’s decisions are hugely influenced by the data that they are able to collect. The information navigates algorithms and helps them improve user experience.

The tracks that Spotify recommends to its users are comprised of songs that the user might not have heard of before, but based on what they have previously listened to, they are highly likely to be what they’re interested in.

Machine learning improves recommendations over time, which encourages users to come back, and continue to listen to Spotify.

These Spotify statistics for business show that Spotify has no doubt brought a lot to the music streaming industry.

This has made it possible for users to access a huge amount of music, all on one platform. It has also created an alternative that has challenged the illegal music download industry and provides compensation for music artists.

The fact that Spotify is always working on its platform is incredibly appealing for users, and we only expect more growth from them in the future.