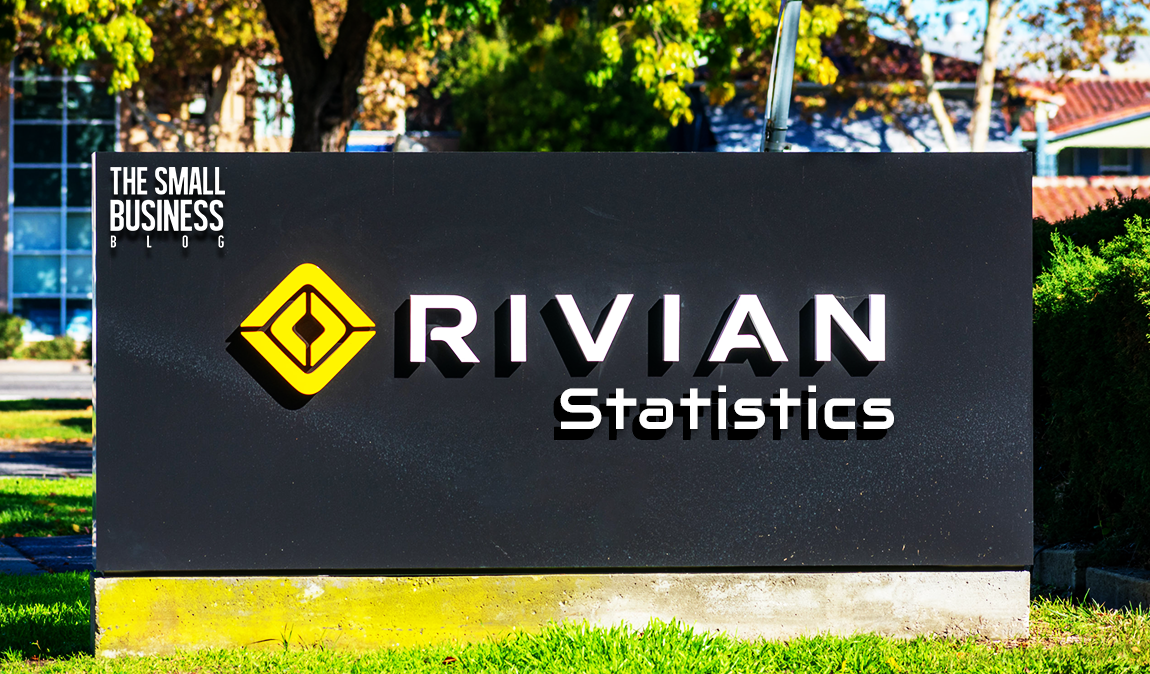 Rivian Statistics 2021: Is It Bigger Than Tesla?

Rivian Automotive Inc. is an electric vehicle manufacturing company that offers products and services related to electric vehicle parts, charging stations, and accessories. Rivian delivered its first vehicle in October 2021, 12 years after the company was founded.

Currently, the company has two significant vehicles, R1T and R1S. The R1T is a five-seater Truck, and R1A is a seven-seater sports utility vehicle.

According to Rivian, their cars contain advanced technologies that are going to revolutionize the present automobile market. Rivian faces significant competition from Tesla, Ford, GM, etc.

Robert Scaringe, the founder, and CEO of Rivian Automotive completed his Ph.D. in mechanical engineering at the Massachusetts Institute of Technology.

After renaming his company, Scaringe kept the research and development department active but didn’t put any effort for public attention for the next 6-7 years.

According to him, it was a period of getting ready for the “next big thing” in the global market.

Earlier, Rivian focused on creating advanced sports cars but soon changed the path when they understood that the future market belongs to fully autonomous electric vehicles. It took team Rivian several years to plan and relocate to the current strategy; to build electric cars.

This article focuses on the statistics and facts about Rivian Automotive Inc.

A Brief Timeline of Rivian

2009 – Robert Scaringe founded the company. At first, the company’s name was Mainstream Motors which changed to Avera Automotive, and later, he confirmed Rivian Automotive as the name.

2011 – The company started focusing on electric vehicles due to the substantial fuel costs and fossil fuel depletion that will hit the market in the next 20-30 years.

2014-2015 – At this period, Rivian was trying to create a sports-oriented vehicle. They managed to bag a lot of investments from different industries, and it helped them widen the research areas and availability of raw materials.

The company opened research facilities in Bay Area and Michigan and relocated its headquarters to get in touch with the suppliers.

January 2017 –  After a year’s try, Rivian managed to acquire a manufacturing plant that Mitsubishi Motors once owned in Normal, Illinois. They took over the plant along with $16 million worth of manufacturing content.

The business industry saw the procedure as a brilliant move since the company got a ready-to-work manufacturing plant better than building one from scratch.

May – November 2018 – Rivian began working on SUVs and trucks. The truck was named R1T and SUV as R1S. The company introduced the vehicles as best for all terrains and semi-autonomous.

Also, they mentioned that the next-generation vehicles would be full-autonomous. Both the vehicles were displayed in the Los Angels Auto Show, which grabbed everyone’s attention.

February 2019 – Rivian had 750 employees who worked at locations such as Illinois, the United Kingdom, California, and Michigan.

2021 – Rivian planned to start shipments of its truck R1T by June but got delayed due to the unexpected global shortage of chips.

September 2021 –  The company became the first to produce and deliver EV trucks in the consumer market. They challenged and overtook General Motors, Tesla, Ford, etc.

November 2021 – Laura Schwab(Rivian former sales and marketing vice president ) filed a suit against the company. Her major complaints were gender discrimination and the security standards of the vehicle.

In the same month, Ford steps back from the collaboration to build an electric car. Ford decided to keep the 12 percent  Rivian shares which now have a market value of $10 billion.

“I really do encourage other manufacturers to bring electric cars to market. It’s a good thing, and they need to bring it to market and keep iterating and improving and make better and better electric cars, which is what will result in humanity achieving a sustainable transport future. I wish it were growing faster than it is.”

The closing market value Rivian achieved three days after IPO on November 12, 2021, was $127.3 billion. Earlier,  Rivian filed an Initial Public Offering in August 2021 to get a valuation of $80 billion.

Rivian’s first stock surfaced on the public share market in November 2021 with initial pricing of $78.00. In Nasdaq, the Rivian shares were traded under the symbol “RIVN,” and its opening price was set as $106.75. Statistics show that the electric vehicle company generated $12 billion by selling 153 million shares.

The company reported 600 employees at the end of 2018. There has been massive growth in the human resource sector, thanks to the investments made by Amazon and other industry leaders. The employee count is still climbing as the company is about to open its delivery soon.

The company purchased a 3.3-million-square-foot Mitsubishi plant in Normal. Currently, the plant has about 2,200 employees, which is expected to reach more than 3000 by 2022. Rivian also depends upon about 1000 robot assistants who assist humans in painting, chassis processing, etc.

Even though the company was founded 12 years ago in 2009, not a single vehicle from Rivian has been delivered so far. People had no idea of what the company was doing all these years until Rivian displayed their new vehicles at the Los Angeles Auto Show in 2018.

Let’s check out some of the statistics of the Rivian products.

Rivian introduced their all-wheel-drive  R1T with three different battery size options. The smallest battery created 105kWh and delivered 230 miles of travel in a single stretch. The 135 kWh rides up to 314 miles, and the largest battery, 180 kWh, can cover 400 miles in one go.

Another significant advantage of the vehicle is the option to mount extra batteries to improve performance. And the batteries can be charged with the help of another in case the charging points are unavailable.

Amazon is the first commercial customer of Rivian after they placed an order for 100,000 delivery vans, and Rivian claims that it’s the most significant order for the EV segment ever set. Based on the current timeline, Rivian expects the delivery of 10,000 electric vans by 2022, and the contract is valid till 2030 to deliver the rest of the vans.

In early 2021, a prototype of the electric van was tested on public roads, and the company claims that the test run was a success over various terrains and climates.

According to Carbuzz, the upcoming electric SUV has already made an impact by bagging more than 48,000 preorders in September 2021. Rivian confirms that the R1S sports utility vehicle production will begin in December 2021. R1S will share almost 90% of its components with R1T.

Rivian has also started working on implementing 145 Waypoints for charging in 30 states and 20 service centers. The autonomous driving fee is expected to be $10,000, and the delivery fee for new vehicles will be $1700.

Rivian has raised billions from the IPO. The company has decided to invest its money in research and development, general and administrative expenses, expand development possibilities for better financial growth, etc.

Based on the Book value on June 2021, Rivian has a total difference of $5.5 billion between assets and liabilities. According to the stats, the company balance sheet’s real cash and cash equivalents are $3.7 billion as of June 2021.

9. Only 53 Years of Oil Reserves Are Left in The World

It is shocking to know that people have already used half of the fossil fuels in the last 100 years. According to the stats of BP, planet earth has 1.68 trillion crude oil barrels left, which will be used within the next 53 years.

RJ Scaringe, the founder of Rivian, says, “The fossil fuels we use today were established up over the course of approximately three hundred million years! And we have used about half of that in 100 years. So, it’s not a debate about whether we have to switch off our dependence on fossil fuels.

The other wrinkle in this is the impact of burning fossil fuels. The longer we wait to transition, the greater the damage to the planet and air quality. Essentially, what we’re doing is taking carbon buried in the earth and moving it into the atmosphere. We see a huge urgency to solve that, and solving that is not an easy problem.”

The EV company is following the path shown by its competitor Tesla as Rivian has announced its futuristic plans to distribute a combination of chargers(fast chargers and slower destinations chargers) in various locations.

Some trusted sources confirm that Rivian plans to install 600 Rivian-only Adventure Network sites with 3,500 DC fast chargers at high-traffic areas. The initial charging speed is kept at 200 kW, which will eventually reach 300 kW.

The following 5-10 years will see the EV market booming, which will demand destination chargers in places like retail stores, parking areas, lodging and dining, tourist spots, etc. 10,000 Rivian Waypoints (destination chargers) that all types of electric vehicles can use are also under the company planning.

According to the statistics, Rivian was able to raise approximately $11 billion from various investments. Many billion-dollar money investment firms have bought Rivian shares that show that the company will be the next “TESLA” in the next ten years.

There are plenty of orders, including Amazon’s 100,000 electric delivery vans and Sumitomo Bank investment, that boosts the production of Rivian electric line of vehicles. In this part, let’s check out some of the most significant investments made with Rivian and related stats.

Mitsubishi shut down its manufacturing operations in Normal in 2015. At one point in time, the plant has delivered up to 200,000 vehicles a year. After some years, In 2017, Rivian acquired the plant and made it active again.

They created a good amount of employment opportunities and brought forward certain employee-friendly practices.  The government of Illinois granted $1 million and a five-year tax reduction as a result of investing $40.5 million over five years. Based on the current stats, the company plans to invest $175 million into the site by 2024.

Rivian received a $200 million financing in 2018 from Standard Chartered Bank. It expanded the total raised fund of the company to $450 million. The 400-year-old Fortune 500 company Sumitomo Corporation had also invested a significant amount in Rivian in 2017.

In 2019, the world’s top e-commerce giant, Amazon, declared that they would invest a significant amount of $700 million in Rivian. Amazon has decided to implement 100% renewable energy-dependent vehicles for its delivery purposes by 2030.

They have already given an order to build 100,000 electric delivery vans from Rivian. Earlier, Amazon had 20% of Rivian shares, which is roughly more than $20 billion worth, and now they have bought another $200 million share value in November 2021, which makes 22% of the total shares.

Ford made a massive investment of $500 million in 2019. The automobile company was investing in building future collaborations with Rivian. But the Covid-19 pandemic created an enormous loss in companies revenue, due to which they had to step back from the contract.

Ford announced that they are not proceeding with developing the electric vehicle luxury brand and are terminating all collaborations with Rivian. However, stats say that Ford has $10 billion market value shares of Rivian as of 2021.

Cox Automotive is considered one of the world’s leading automotive service organizations that focuses on providing solutions to vehicle-related issues. The 2014 founded company has more than 30,000 employees working for them.

After the latest $350 million investment by the Atlanta-based company in 2019, the total funding on Rivian reached $1.5 billion. Cox Automotive plans to build the next-generation vehicle support and has a permanent member on Rivian’s board as part of the business agreement.

The IPO makes it possible to sell the company shares to institutional investors and retail investors. It helps the company increase its market value and the trust of the public. Rivian filed an Initial Public Offering in August 2021 to get a valuation of $80 billion.

75-year-old Saudi Arabian-based company Abdul Latif Jameel has 114 million shares in Rivian which they obtained by lending $303 million in loans.